The orchid that returned home

Each of the orchids I care and handle has its own story! Sometimes I feel blessed for choosing this profession. It might not be profitable yet, but I could write a book with all of those stories hiding behind each orchid acquired through the store. Usually in every story we meet a separation and the following development of the orchid at the hands of a friend. It appears it’s not only like that, it happened that one returned home!

Almost a year ago, late February ’13, an orchid Phrag. sargentianum x bessae was put carefully in its cylinder and left the hospitality area, to find its way at the collection of a customer. Approximately 2 in 5 friends of the store send some sort of update – usually a photo – shortly after their purchase. This particular orchid found its way to the hands of an artist. The form factor of the flower and its fiery red color was probably a source of inspiration. It was depicted on a daring red on red painting. A couple of months later I came across the painting on facebook and something whispered I knew the model. My suspicion was valid and the artwork titled Ifestio (translates to volcano) intrigued my interest. I contacted the artist (Areena) and the painting came to MyOrchid in a sense as an orchid returning home! 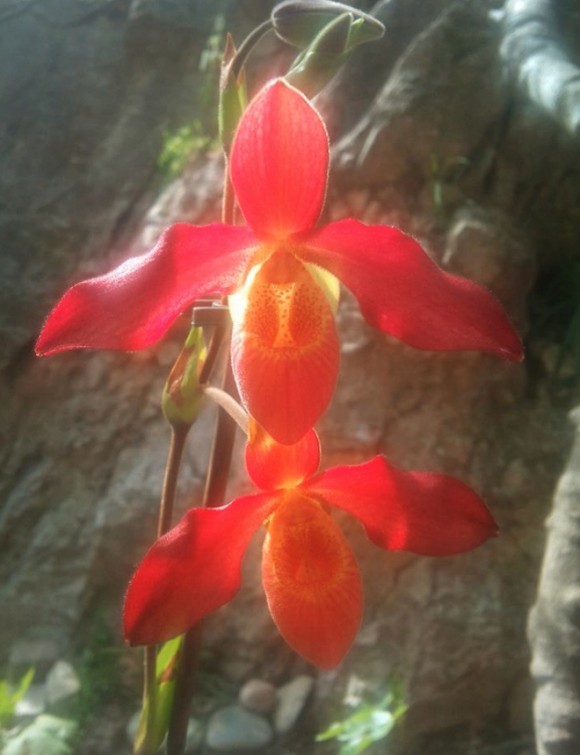 Photo of the orchid enjoying the sun, as sent by the artist, March 13

Along with the acquisition of the artwork I asked the transferal of the copyrights. I have thought that it would be interesting for more friends of the store to be able to acquire something of its magic. A few days ago, a Greek company took the challenge to develop and manufacture for MyOrchid, the production of hand-crafted hollow candles with the art as a decoration. The high quality craftsmanship and the magic of the light playing with the art… gave a unique end-result that could decorate every place, including those of orchid enthusiasts.

The orchid candle, it looks like a volcano of light. 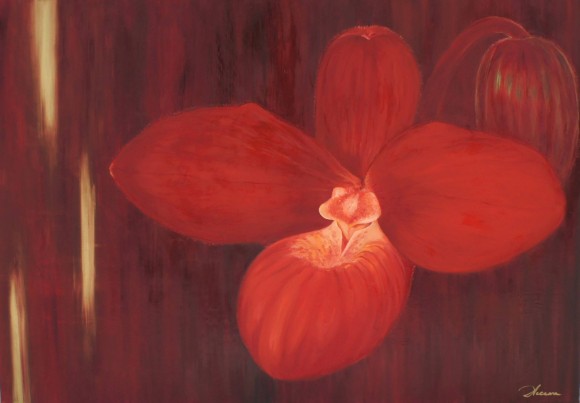